As a little girl, Cristy Lee remembers growing up in an immersive playland that other kids might fantasize about — she spent her days running around the greenhouse in the backyard of her home outside of Daytona Beach, Florida. A greenhouse filled with orchids, a pool, and a stone waterfall — all hand-built and designed by her father.

Other days called for joy rides on her dad’s dirt bike, where she sat behind the gas tank as a toddler, her tiny hands resting on the handlebars while he puttered around the yard. 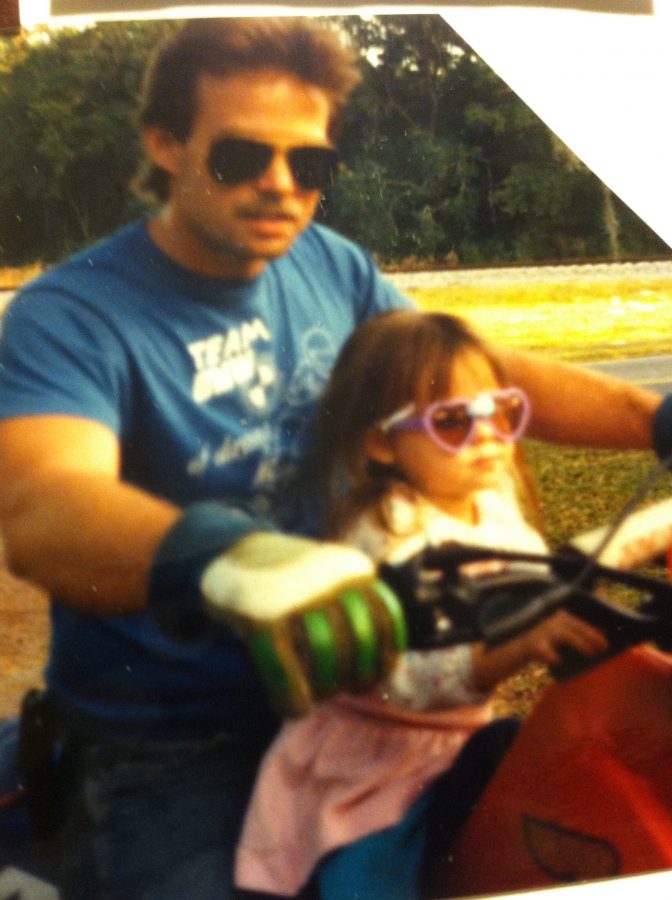 And yet Cristy’s favorite memories as a child remain in her father’s local import auto shop and the garage in their home, where she watched him tinker with his classic BMW 2002 — a restoration project he spent years working on with the hopes of handing over the keys to Lee when she was of age.

The car never came to fruition, but for Cristy, it’s never been about the final outcome.

For this independent spirit, it’s always been about working with her hands. Over the years, her father’s DIY mantra has followed her into her adult life, where she’s fallen in love with building and rebuilding cars and motorcycles and learning more about the reconstruction process.

Cristy is a highly active motorcyclist with over 18 years of riding experience. Every car and motorcycle Cristy works on offers a new challenge or a new concept to grasp. When she’s in the shop, she’s always learning something new while working with different manufacturers, makes, models, and years.

Today, Cristy has made a name for herself. She made a bold move from Daytona Beach to Detroit after college to invest in real estate. Breaking into the industry as a Radio DJ not long after her move to the Motorcity, she began to follow her passion for motorsports and has since been seen on FOX, NBCSN, ESPN, SPEED, ABC, and CMT as a Motorsports host and pit reporter, covering the XGames, MotoGP, WorldSuperBike, MotoAmerica, American Flat Track, Arenacross, Nitro Rallycross, Off-Road Truck racing, and Monster Jam.

She is best known for her work as a host on the all-female automotive show “All Girls Garage” and “Garage Squad” on the MotorTrend Network, where she showcases her expertise, taking on complex automotive projects, classic car restorations, and performance upgrades for both customers and some very deserving car owners. She can do everything from grinding metal, to ripping out an entire car interior, to pulling an engine and transmission all the while being able to put it back together again. Cristy is also known for her work as a host on the “Barrett Jackson Collector Car Auction LIVE” broadcasts for MotorTrend and Discovery Networks.

Her latest endeavor will be taking on the role of interior designer and automotive specialist on the upcoming discovery+ series “Celebrity IOU Joyride,” a spin-off of HGTV’s “Property Brothers” Drew and Jonathon Scott’s hit Celebrity IOU. On the show Cristy will work with A-listers, including pro skateboard legend Tony Hawk, Mary J. Blige, Octavia Spencer, Renee Zellweger, and James Marsden, helping them renovate and design dream joyrides for the people they love. She’s also tapped into her home

renovation and design experience as the Exterior Designer on Food Network’s “Grill of Victory” where amateur-chef contestants battle for the backyard makeover of their dreams.

Cristy Lee is considered a go-to guru for all things cars and motorcycles, while paving the way for women in the industry. She believes that while she grew up learning how to be independent and confident in her abilities, she wouldn’t be where she is today without a strong support network. In what was once considered a historically male-dominated industry, Lee said it’s beautiful to see such an abundance of women working in automotive, as well as trades industries in general. She is part of a collective group of women empowering one another, offering advice and inspiration.

For Cristy, just being in the automotive game is how she empowers other women. Lee urges women to go after their most passionate endeavors. She believes women can do anything they put their heart and mind to, and Lee is here to show women they are capable.

A true lover of all-things motorsports, in her spare time she enjoys turning laps at track-days, riding moto trails, or just cruising around the country. When she’s not riding on two-wheels, Cristy loves to get behind the wheel road racing, improving her skills at performance driving schools, doing autocross and even some drag racing. Always on the go, she manages to still find time to squeeze in mountain biking, snowboarding, weightlifting, fitness and of course, her personal projects – like her latest 2019 Ninja 400 track bike build or time with her 1972 Chevy C10. In addition to her fuel-filled lifestyle, Cristy Lee continues to focus on real estate, investing, home renovation and interior design.