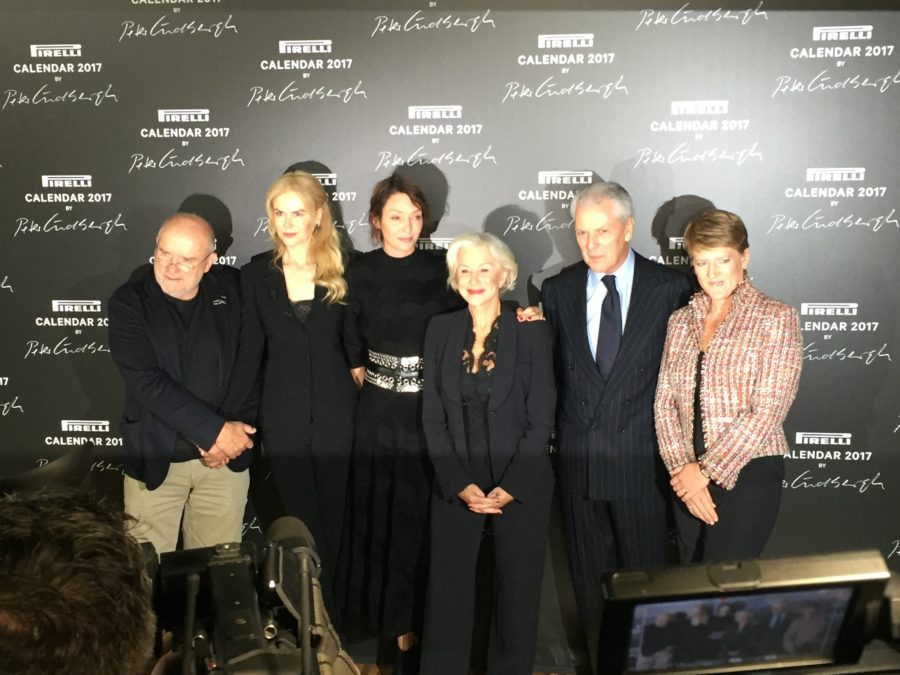 The Pirelli brand personifies high performance for motorsports enthusiasts of the two and four-wheeled kind. The tire powerhouse has translated this edgy appeal to print, producing The Pirelli Calendar, a highly regarded branded calendar featuring some of the world’s most famous models and actresses/actors, captured be legendary photographers dating back to 1964.  This exclusive calendar, infamously dubbed “The Cal”, is not available for purchase anywhere, but only available to Pirelli’s most elite clients, consumers, and VIP’s.  I recently had the honor of representing Pirelli Moto USA, attending the 44th unveiling of The Cal in Paris, France.  This gathering is covered by so many well-known fashion, art and human-interest media outlets globally like The New York Times, CNN, Vogue, and TIME Magazine – just to name-drop a few.  Some big names in the industry have graced this calendar, and this year did not disappoint featuring the likes of Nicole Kidman, Penelope Cruz, Kate Winslet, and Julianne Moore, captured by famed photographer to the stars, Peter Lindbergh.

If you have yet to see a Pirelli Calendar for yourself, it’s not what may be assumed – scantily clad models posing with an exotic sports car, but The Cal has showcased some risqué and even slightly controversial snapshots over the years, evoking a more provocative allure at times.  This years’ release was different than any of its predecessors, this years’ calendar was about a beauty which speaks about individuality, courage to be yourself and your own private sensibility, as explained by Lindbergh.  In a time when women are expected to uphold an image of perfection, eternal youth, and effortless beauty, is Pirelli Tire not only a pioneer in manufacturing performance tires, but in breaking down this barrier for women in the media and women in general – Are they setting a new trend?  As a female establishing my own image and brand within a heavily male-dominated industry, both moto and automotive, saying I personally identified with this year’s calendar theme is an understatement.  For me the idea of embodying, embracing and showcasing prominent female figures in their most natural silhouette – unprovoked by make-up, lighting and Photoshop – sets an emerging trend in the media for women.  I was privileged not only to attend the 2017 reveal in Paris, but also experience this trend at the press conference and gala dinner.

The conference was held at Hotel Salomon de Rothschild, located in the heart of Paris, a former residence of the widow to the French banking dynasty founded in 1812.  It began with a press photoshoot followed by a Q & A style conference featuring calendar models Helen Mirren, Uma Thurman, Nicole Kidman, the man behind the lens – Peter Lindbergh, hosted by well-known BBC Sports presenter, Clare Balding.  After a frantic photo session upstairs with them as a group, over 400 plus guests and press were ushered downstairs for the conference.

Lindbergh and the actresses shed light on their experience of The Cal – titled “Emotional”, on stage.  Personally, I was so inspired by their comments and thoughts around this calendar.  Thurman comments on the vision of this calendar, freeing women of oppressive and false standards.  Mirren showing off her age, 71, proudly in the photos, talks about “reeducating our eyes because we’re so accustomed to seeing such spectacular, digitally enhanced photos, but this shoot was human and real.”  Kidman boasts, “This is a choice for women, a choice to be beautiful with or without the enhancements of make-up… wardrobe  …isn’t that what we all want…. the choice.”

The Cal, photographed in black-and-white, “Shows the women, and not the stretched, manipulated, emptied person you see in magazines today.” – adds Lindbergh.  These statements made on stage speak for themselves and what this calendar truly embraced – some deep thoughts to digest right after my morning espresso.  Post-press conference, some light Hor d’oeuvres were offered, and then it was time to scurry off to prepare for the Gala dinner that evening!

Citè du Cinema in Paris hosted the extravagant Parisian Gala Dinner, a well-known film studio complex.  Upon arrival as people flooded in, I was greeted by an assembly line of white-gloved wait staff offering a plethora of drinkable and edible delights.  The buzz at the red carpet couldn’t be unnoticed as a mob of press and paparazzi anxiously awaited the arrival of the A-listers.

This year’s calendar may have been stripped of some of its ‘glitz and glam’, but this party certainly wasn’t!

Guests mingled and socialized, waiting for the 800-plus attendees of Pirelli VIP’s, clients and global stars all to arrive at the venue.  Beautifully arranged tables, candle-lit with fresh-cut orchids as a centerpiece, adorned with wine glasses and a variety of silverware meant we were all instore for a delectable dining experience.

Before guests were seated at their designated tables, one could enjoy a glass of bubbly and passed snacks, and even snap a few pics with the ‘blingy’ art easels featuring some very Pirelli-type moldings on the center floor.

The Cal in 2017 features untouched images of 14 world- renowned actresses, shot between the months of May and June in only five different locations – on the stateside in Los Angeles and New York City, back to Europe in Berlin and London, and just north of Paris on the French beach of Le Touquet.  Behind the red carpet, a massive photo collage of backstage snaps was also unveiled on the wall, and even more personal side to The Cal experience.

A ‘behind-the-scenes’ video, traditionally created to reveal the hidden workings of the calendar, first-hand perspectives from the actresses featured, and some ‘behind the lens’ moments from Lindbergh, would be played later on in the evening.

The master of ceremonies, once again Ms. Balding, asked everyone to be seated and the evening would officially commence! The Gala began by welcoming the attendees and then the featured guests up to the stage to reveal each of the calendars stunning images, page by page.  A three-course Italian feast was served during, accompanied by bottomless French wines, finished with a delicate French pastry.  This grand night continued with a unique laser light show, very Pink Floyd, and 20-plus piece symphony orchestra complete with well-known French vocalists on stage.

Let’s not forget this chic party of celebs and fashion icons is thrown by Pirelli tire, and I was seated at what I’d call the “motorsports table”, including Renato Gianluca, Global Marketing Director for Pirelli Moto and Giacomo Agostini, 15 times World Champion Grand Prix motorcycle racer.

This extravagant evening would conclude with a DJ and dancing, but lastly, and most importantly, the receipt of each guests very own 2017 Pirelli Calendar.  A publication that may become a cornerstone for new trends within the industry – celebrated in the mecca of cultural trendsetting – Paris.

There are no upcoming events at this time.